More October art. I do like the notion of just doing a bunch of little pieces because it’s [a month], and I sure as shootin’ don’t like to stick to prompts. So here’s Spider-Woman (working on hair textures), a nut hatch (mixing blue and black inks), penguin (different pen, minimalism) and a nighthawk (loose lines). 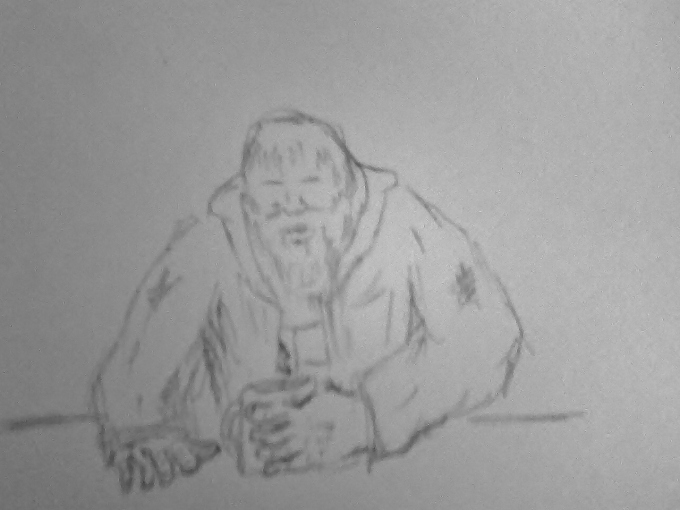 This is just a little pencil sketch of a homeless guy clinging to a cup of coffee, inspired by events in my e-book Tex Arkana

I just kind of wanted to make a piece for the oft-forgotten, oft-mocked member of Super Soldier’s All-Star Winners Squadron, The Human Lantern. First appearing in Super Soldier Man of War #1 (June 1997) and mentioned in Iron Lantern #1 from the 2nd wave of the Amalgam Comics crossover/mashup, The Human Lantern is a combination of Alan Scott’s Golden Age Green Lantern and the Golden Age Human Torch, Jim Hammond, so let’s call him Alan Hammond. Despite being a combination of two of the Golden Age’s most noteworthy figures, The Human Lantern was reduced to a bit part shilling cake in his only appearance (though he may have a more important influence on the history of the Iron Lantern).  Without further ado, I present the color pencil sketch I made to give a little shine to an overlooked character.